skip to main | skip to sidebar

This site documents the activities of Vision Forum 2009-10. No new post will appear here. If you want to follow the latest activities of the organisation and individual participants. Click here.
Posted by Vision Forum at 16:28 No comments:

The Invisible Generation in Kiev - POSTPONED


Following an ash cloud from an Icelandic volcano eruption and the closure of much of European Airspace, Vision Forum has decided to postpone the events in Kiev until July 2-4.

We are very sad about this and apologize to all involved for any inconvenience caused.

Oksana Chepelyk will still start the upcoming events by perform her FLYING UP SKY-SCRAPERS on Friday June 18, at 20-00 at Rusanovskaya Naberezgnaya - Welcome!
Posted by per huttner at 14:32 No comments:

Vision Forum, PAI and Les’ Kurbas Center are proud to announce The Invisible Generation in Kiev.

The Invisible Generation is an ongoing contemporary art project that has appeared in different guises in Beijing, Melbourne and Shenzhen. The venues have been carefully selected due to their specific historical contexts and their perceived trajectories into the future. The project takes its starting point in performative traditions, but focuses on practices and events that cross over into other time-based activities, such as sound, film, video, literature, theatre and workshops. The project offers new situations for art and audience to meet outside of where one expects to meet an art piece or performance. The Invisible Generation allows the artists and audience to investigate how art can become a tool to shift our outlook at reality when it appears with an element of surprise.

The numerous interventions of The Invisible Generation will take many shapes and appear at many unexpected places. During three days Private Contractors (Olav Westphalen and Per Hüttner) will offer a free service to the citizens of Kiev. In three different public locations they will set up a vending table and some information placards, offering to censor books and printed matter professionally and free of charge.

Kiev artists’ collective TanzLaboratorium will stage two distinctly different projects. They drive around a group of strange aliens in an impressive SUV. When the creatures leave the car they are lead by the hand by immaculately dressed people and taken around to see all the tourist sites of the city. The group will stage heated discussions in the metro about philosophical issues - the words spoken are quoted from Plato’s dialogues.

Huang Xiaopeng will distribute posters and pamphlets around Kiev that offer new outlooks on political history and activism. He takes politically charged texts from the communist past and capitalist present that have been google-translated so many times that their message has been totally scrambled. He mixes these with explosive imagery that beckons us to believe that the content is forceful and subversive.

On a more poetic note, Kiev based artist Oksana Chepelyk will release a large number of Chinese paper lanterns in the form of skyscrapers. These will blow away in the Kiev night sky, allowing us to see the calm beauty while reflecting on how real-estate speculation affect to our daily lives.

On Friday July 2 a DJ evening will take place at the yard of Les’ Kurbas Center including Alexander Kokhanovsky, Jean-François Robardet and Klas Eriksson. Among the many events there will also be film screenings by Oksana Plysyuk, Oleg Chorny&Gena Khmaruk and Huang Xiaopeng.

Just a quick note to say that it was a true pleasure to see, hear and experience your presentations!

You have done extremely well and it has been great to see you move forward during your individual work.

I look forward to more. Here is a pix from Ceclia's wintery woods! 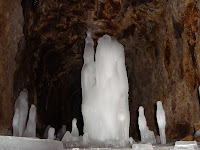 Love Per
Posted by per huttner at 20:19 No comments: 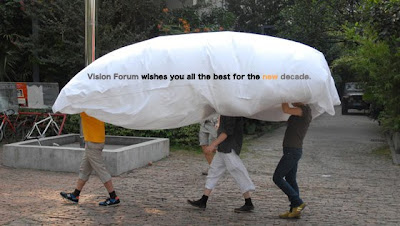 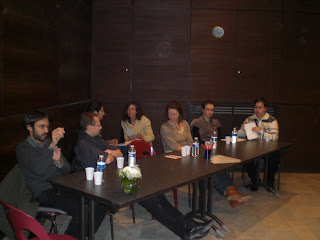 Vision Forum organizes a conference in collaboration with ERBA at Musée du Temps in Besançon. The discussion will focus on the role of international dialogue and exchange for a vital contemporary visual art scene. Part of the program will also touch upon how science and interdiscplinarity can offer a vitamin injection for art and culture.

The discussions are lead by Laurent Devèze.
Posted by Vision Forum at 13:10 No comments:

The Invisible Generation in Shenzhen in the end of October was a wonderful event and a great success. Everyone at Vision Forum extends their heartfelt and warm thanks to all the participating artists, the wonderful audience and the sponsors and the organizers at OCAT - especially Wang Jing for her unending enthusiasm amidst all the chaos.

You will find more pictures on:

http://tig-china.blogspot.com/
Posted by per huttner at 00:08 No comments:

Vision Forum is an open platform for sharing and developing visions to inspire, expand and enrich the expression and practice of contemporary visual art.
Vision Forum arranges various forms of international meetings between established professionals, where practice and theory are merged in unexpected and changing forms.
This blog is dedicated to the Vision Forum participants who are based in Sweden.
Contact: vfprog (at) gmail (dot) com